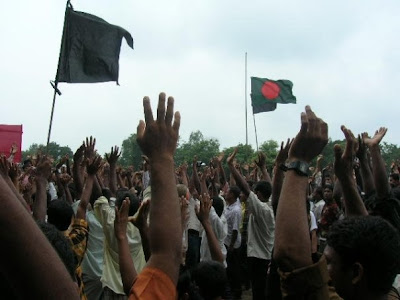 Different socio-political organisations will observe Phulbari Day today in remembrance of the demonstrations against Asia Energy’s planned open-pit mining at Phulbari in Dinajpur on August 26, 2006.

Three people were killed and many were injured when lawmen into protests against at the Phulbari coal field in August 2006.

Four days after the demonstrations, the then BNP-led government on August 30 signed a six-point agreement with protesters, spearheaded by the national committee to protect oil, gas, mineral resources, power and port to expel Asia Energy from Bangladesh and ban open-pit mining.

The committee, however, expressed its dismay at the non-implementation of the agreement as Asia Energy is still active in the country.

The national committee and different left-leaning political organisations have chalked up programmes to mark August 26 as Phulbari Day. The committee will place flowers at Shaheed Smritistambha at Phulbari and hold a rally there.

The committee will also place flowers at the Central Shaheed Minar and observe the day in other places.

Jatiya Gana Front will hold a rally and bring out a procession in Muktangon to mark the day. The organisation in a statement said any move for open-pit mining in Bangladesh would be stopped.

Samajtantrik Chhatra Front will also bring out a procession on the Dhaka University campus on the occasion demanding expulsion of Asia Energy from Bangladesh.

Phulbari Resistance on Facebook
Posted by admin at 1:42 PM