More than 50 people, including the member-secretary of the National Committee to Protect Oil, Gas, Mineral Resources, Power and Ports, Anu Muhammad, were injured when police charged into marchers heading for Petrobangla headquarters in the capital midday Wednesday in protest against the government’s decision to award three offshore blocks to international oil companies.

About 1,000 leaders and activists of the committee gathered at Muktangan where they held a rally in the morning before marching towards the Petrobangla office at Karwan Bazar where the protesters were to lay siege.

The national committee announced the programme in protest at the government’s decision to award three blocks to two IOCs with a provision allowing them to export up to 80 per cent of gas. The committee feared such a move would threaten the country’s energy security. 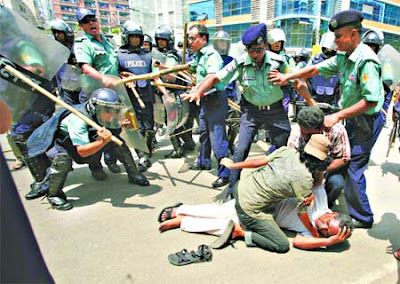 Policemen charge at economist Professor Anu Muhammd with truncheons as he fell on the road during a police attack on a peaceful procession of the national committee to protect oil, gas, mineral resources, power and port which was marching to lay siege to the Petrobangla head office in Dhaka on Wednesday. — New Age photo

Police swooped on the protesters and clubbed them indiscriminately after they broke through the barricades set up by the lawmen at Paltan crossing at around noon and tried to march towards the Petrobangla office.

Angry protesters fought pitched battles with police at Bijoynagar for about half an hour before dispersing. They attacked vehicles during the clash forcing traffic to make a detour.

Read excerpts of the interview.

The injured were taken to Dhaka Medical College Hospital and most of them were released after first aid. Professor Anu Muhammad was shifted to Square Hospital from DMCH.

Journalists trying to visit Anu Muhammad at Square Hospital were refused permission to see him. When contacted, the hospital management said it might have been done at the advice of the attending doctors.

Condemning the police action Anu Muhammad told reporters that their campaigns were aimed at protecting the natural resources of the country. ‘We are not against the government; we are against the move to export our natural resources. It is the government’s responsibility to protect the lives and property of the citizens. I don’t understand why the police pounced on us,’ he said.

Later, the committee held a meeting at the office of the Communist Party of Bangladesh at Paltan.

The committee convener Sheikh Mohammad Shaheedullah at a press conference said that the police had charged baton on their peaceful demonstration because the government was desperate to protect the interest of international oil companies instead of national interest.

‘We strongly condemn the unprovoked attack. This has exposed the fascist attitude of the government,’ he said demanding immediate action against the police officers involved in the attack.

Shaheedullah warned that the government would not be able to foil their movement by resorting to repression. He vowed to continue the movement until the decision to allow gas export was scrapped.

The committee announced fresh programmes protesting at Wednesday’s police action. The programmes include countrywide demonstrations and a protest rally at Muktangan in the capital this afternoon. The committee will march towards the Prime Minister’s Office from Muktangan at 11:00am on September 10. Besides, it will hold rallies and processions in different thanas of Dhaka city and elsewhere in the country.

The committee will announce further action programmes, including hartal and siege, if the government does not refrain from leasing the offshore gas blocks, he said.

The speakers said that the prime minister’s approval of offshore oil and gas exploration deals in the Bay of Bengal with two international companies, ConocoPhillips and Tullow Oil plc, ran counter to her poll campaign pledges.

The cabinet committee on economic affairs, headed by the finance minister, on August 24 approved offshore oil and gas exploration deals with the two companies in three sea blocks in the resource-rich Bay, on condition that they would not operate in the disputed areas in the blocks.

At the rally, Shaheedullah said they demanded cancellation of the Model Production Sharing Contract 2008, approved by the last interim government, saying pressure from ‘colonialists’ had been behind it.

Anu Muhammad said the present government was not working as the true representatives of the people. ‘The energy ministry and Petrobangla are working for multinational companies,’ he said. ‘Till now three of 28 blocks have been allocated to international companies and gradually the rest will be given to them,’ he said.

Mujahidul Islam Selim said that Sheikh Hasina during her first stint as prime minister had told the then US president Bill Clinton in 2000 that Bangladesh would not export gas without ensuring a 50-year domestic supply. ‘After such a promise, this latest agreement is extremely treacherous,’ he said.

Different left-leaning political parties and organisations, meanwhile, condemned the police attack on the ‘peaceful’ march of the national committee.

The Communist Party of Bangladesh president Manzurul Ahsan Khan and general secretary Mujahidul Islam Selim in a press statement termed the police attack fascist and contrary to democracy and basic rights of the people.

Workers Party president Rashed Khan Menon and general secretary Bimal Biswas, condemned the police attack and called on the government to drop the plan to lease out the three offshore gas blocks to international companies.